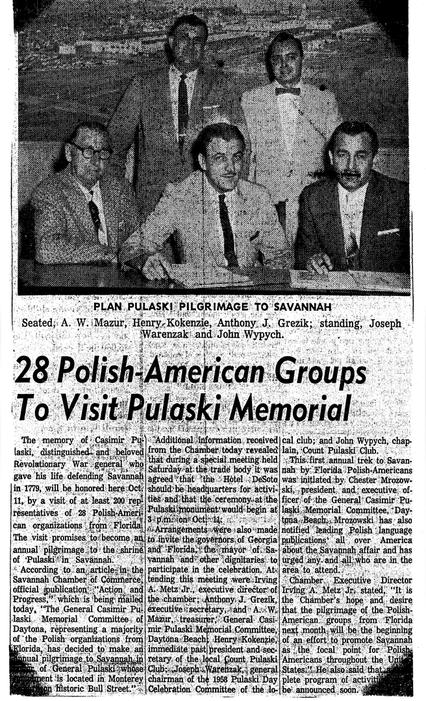 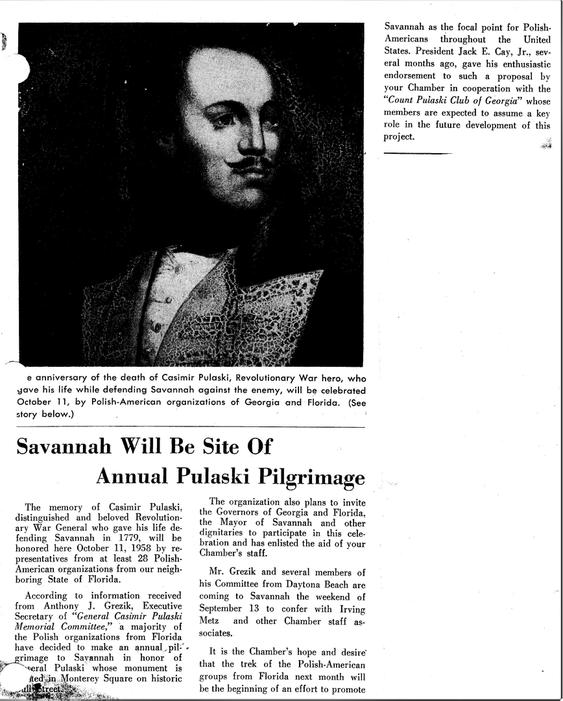 Shown above is the brochure distributed at the 1958 event.

The First Annual Pilgrimage of Polish-Americans to Savannah, Georgia

On Saturday, October 11, 1958, Savannah celebrated the 179th anniversary of the death of Brigadier General Kazimierz Pulaski at the Battle of Savannah in 1779.

The program on that day began with:

The event was staged by the Count Pulaski Club of Georgia, chaired by Mr. Joseph Warenzak, with the aide of Henty Kokenzie, John Wypych, Andrew Kwolek and Julius Budacz.

Note: Shown below are some of the photographs taken of the event published in the Savannah newspapers with their original captions below.  ​

On Saturday, October 11, more than 150 Polish-Americans principally from Florida and Georgia, journeyed to Savannah to pay homage to General Casimir Pulaski and take part in the annual pilgrimage here in his honor.

Responsible for this colorful celebration, which your Chamber believes is the beginning of an effort to publicize Savannah as the focal point for Polish-Americans throughout the United States, was the Count Pulaski Club of Georgia, the General Casimir Pulaski Memorial Committee of Florida and the Chamber.

The carefully arranged program of activities began early Saturday morning with a special Mass in Pulaski's honor at the Cathedral of St. John the Baptist. Highlight of the day's celebration was the march to Pulaski's monument in Monterey Square.

An honor guard of Marines in full dress fired an 18-gun salute and the Fort Stewart military band accompanied the soloist's rendition of the Polish national anthem and the Star Spangled Banner.

Following the ceremonies in Monterey Square the group traveled to Fort Pulaski where they watched Mr. Mrozowski drop a wreath from a National Guard helicopter neat the mouth of the Savannah River - where Pulaski was reportedly buried.

Plans for a more impressive celebration next year are already being made, according to Henry Kokenzie, General Chairman, 1958 Pulaski Day Celebration Committee. 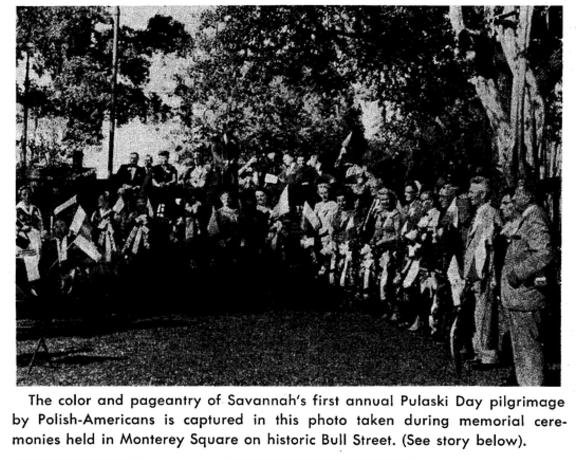