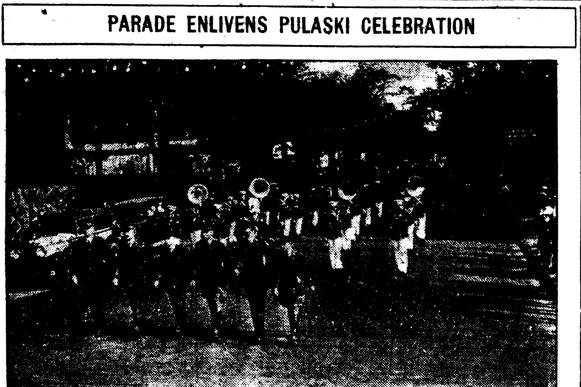 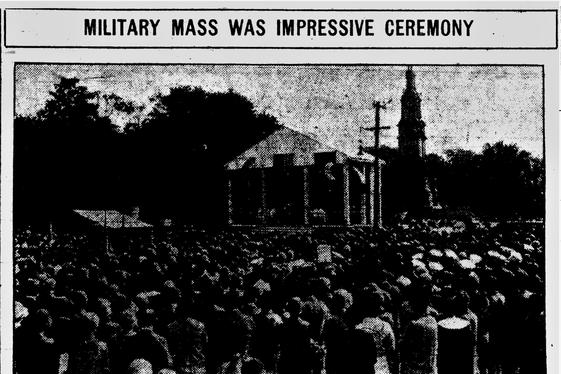 On October 9, 1929, Savannah celebrated the 150th anniversary of the death of Brigadier General Kazimierz Pulaski at the Battle of Savannah in 1779. Beginning in June of that same year, Savannah newspapers printed more than 50 articles, many of them very lengthy, on the Battle of Savannah, Poland, Gen. Pulaski's life and death, as well as the ceremony and events leading up to it.

The program on that day began with:

Note: Shown below are some of the photographs taken of the event published in the Savannah newspapers with their original captions below. Their original quality is poor. ​

Prior to, and in conjunction with the 1929 ceremonies commemorating the 150th anniversary of Gen. Kazimierz Pułaski's death, President Hoover signed Public Resolution 16 of 1929 on June 26th making October 11th a national holiday (minus the day off from work provision). Below is the Savannah Press' article from June 30, 1929 with that proclamation:

A proclamation inviting the people of the United States to observe Friday October 11, with appropriate exercises as the one hundred fiftieth anniversary of the death of Brig. Gen. Casimir Pulaski, Revolutionary hero, in commemoration of his death, has been issued by President Hoover. Savannah is making extensive preparation for the observance of this event in view of the fact that Gen. Pulaski was wounded at the siege of Savannah on Oct. 9, 1779, dying two days later. A monument to him is standing in Monterey Square.

The proclamation, in full text, follows:

"By the President of the United States of America, a proclamation:

"Whereas , October 11, 1779, marks in American history the date of the heroic death of Brigadier General Casimir Pulaski, who died from wounds received on October 9, 1779, at the siege of Savannah, Ga.,; and

"Whereas, October 11, 1929, marks the one hundred and fiftieth anniversary of the death of General Pulaski, it is but fitting that such date should be observed and commemorated with suitable patriotic exercises;

"In witness whereof, I have here unto set my hand and caused to be affixed the great seal of the United States.

"Done at the City of Washington this 28th day of June, in the year of our Lord One Thousand Nine Hundred and Twenty-nine, and of the Independence of the United States the One Hundred and Fifty-third..

"By the president: Henry L. Stinson, Secretary of State."

Note;  This Public Resolution has be signed by every president since Herbert Hoover, making it a continuous holiday. ​

Medallions Tokens of Appreciation For Work In Promoting Friendship

The bronze medallions presented last night at the Pulaski banquet on behalf of the United States Pulaski Sesquicentennial Commission to Mayor Saussy, Col. E. George Butler and Thomas Gamble are expressions of appreciation of the services of these three Savannahians in the promotion of friendship between this country and Poland through their work in behalf of the celebration of Pulaski's services in American independence.

This is clearly indicated by the medallions themselves.

Poland is deeply sensible of the part this country played in the World War and the restoration of Poland to its place amongst the independent nations of the world. As some orator said at the dinner last night, Pulaski left his country robbed of its freedom, to help America gain its liberty and America in return had repaid its obligation in restoring to Poland the freedom taken from it by a coalition of avaricious and autocratic powers.

The medallions were bestowed on the Polish minister and the members of the special Polish delegation sent to Savannah by the government of that country. The underlying reasons for the presentations to the three Savannahians were:

To Mayor Gordon Saussy for his work in making the sesquicentennial the success that marked every feature of the program yesterday. Mayor Saussy, from the day the anniversary was brought to his attention by the Polish representatives, entered heartily into the spirit of the occasion, gave earnest thought and continuous cordial co-operation with the representatives of the United States government on the commission, and to his unceasing efforts was to a great extent due the beautiful program that made the day a memorable one. Mayor Saussy conceived the idea of the special souvenir number of the Georgia Historical Quarterly, which was given to the guests at the dinner last night and co-operated heartily with William W. Gordon, president of the society, in planning it. His official correspondence over the celebration was heavy and brought him into connection with the leading Polish-American citizens of the country as well as with the Polish and French representatives in Washington.

As president of the Board of Trade, Col. E. George Butler placed the machinery of that organization at the disposal of the mayor and from the inception of the plan to its conclusion gave intelligent and earnest personal support to the work of the municipality. Nothing was left undone that he could bring into play.

The series of articles by Thomas Gamble dealing with the life of General Casimir Pulaski and the Siege of Savannah, published in the local newspapers, attracted considerable attention and were freely used in other cities in the preparation of addresses and papers relating to the sesquicentennial, which tomorrow will be observed at many points in the North and Middle west. These articles dealing with the history of Poland and the life of Pulaski in his native land and in America until his death at Savannah were commended by the Polish legation and the hope expressed that they would be made available in book form.

A set sent to the library at the University of Chicago was reported as freely consulted by students. Sets have been made into book form for the SAvannah Public Library, the Georgia State Library at Atlanta, and one was presented to Count Pulaski at the lunch yesterday. The director of the Koscius[z]ko Foundation in New York City has requested that a set be bound for that institution. Two sets were officially sent to Warsaw.   ​ 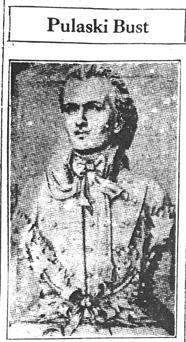 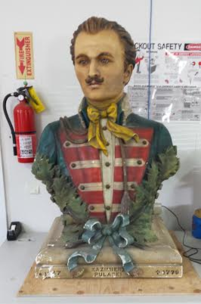 Three army officers of the Republic of Poland who have reached New York on there way here to attend the ceremonies upon the 150th anniversary of the death of General Casimir Pułaski. They are:  left to right, Lt. Col. Piotr Głogowski, Col. Serge Zahorski, and Lieut. Apolonjusz Zarychta. They will represent Marshal Piłsudski, president of Poland, and the army of that country.

Various military and patriotic organizations, two bands and a drum corps formed a colorful and inspiring procession yesterday morning as a part of Savannah's celebration in honor of the memory of brig. Gen. Casimir Pułaski, who died in the siege of Savannah one hundred and fifty years ago.

At left is a facsimile of medallions presented at the Pulaski dinner last night to Mayor Saussy, E. George Butler and Thomas Gamble by Chairman Werwinski on behalf of the United States Pulaski Sesquicentennial Association. The medals are a token of appreciation of the services of these Savannahians in the promotion of friendship between the United States and Poland through their work in behalf of the celebration yesterday. The obverse (left) shows the bust of George Washington and the inscription, "George Washington, President of the United States 1789," and the reverse shows two hands clasped in a token of friendship and a peace pipe and tomahawk crossed, the peace pipe on top, and has the incsription, "Peace and Friendship."

Exercises in Monterey Square at Pulaski Monument. Count Franciszek Pulaski, delegate of the Polish government, is addressing the assembled citizens. 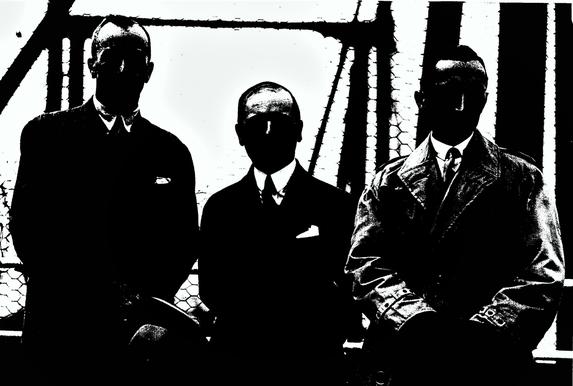 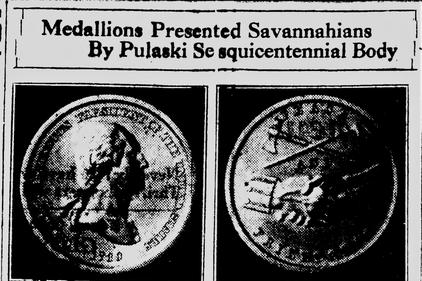 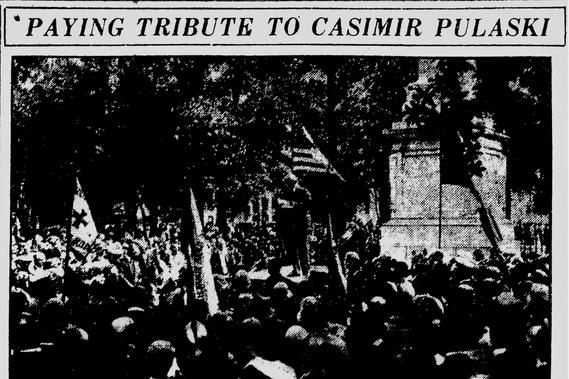 At left is a photograph of the bust of Gen. Casimir Pulaski, executed by Joseph Aszklar of Milwaukee. The photographs were distributed at the Pulaski banquet last night, and the announcement made that the bust upon its arrival here would be presented to the city of Savannah.

Note:At right is the bust in its present state. The bust has been stored at Ft. Pulaski since circa 1947, after the city of Savannah didn't want to display it any longer. Park Ranger Talley Kirkland hid the bust inside the fort for many years, saving it from demise by others.

One of the most striking and impressive events of Pulaski Day was the solemn high mass in the Park Extension yesterday morning, conducted by the Rt. Rev. Michael J. Keyes, D. D. bishop of Savannah. An immense throng gathered to do the honor to the memory of Brig. Gen. Casimir Pulaski, whose life was sacrificed in the siege of Savannah. 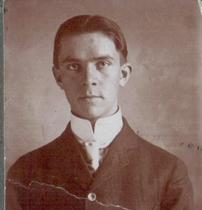