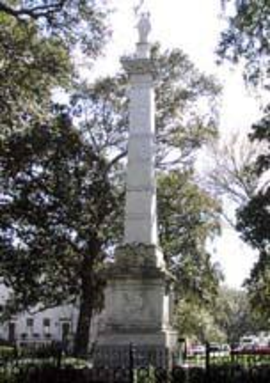 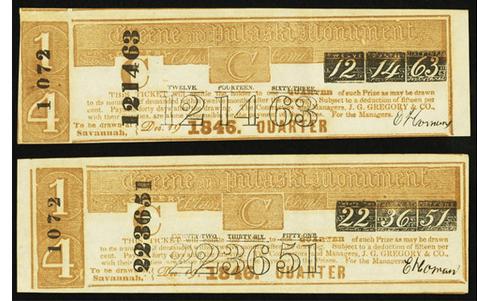 of the Pulaski Monument

From 1825-1852, a monument in Chippewa Square was dedicated to both; Brigadier Generals Kazimierz Pulaski and Nathaniel Greene. The cornerstone for this monument was laid by Major General (Marquis) de Lafayette in 1824.

By 1852, enough funds were earned by a lottery to construct a separate monument to Gen. Pulaski. The sculptor, Robert E. Launitz of New York city visited Savannah in February 1853 and chose Monterey Square as the location based on the setting appropriate for the monument. Construction started in July 1853 by the contractor of Luffburow and Jones, The cornerstone was laid on October 11, 1853, the 74th anniversary of Gen. Pulaski's death.

Major William P. Bowen located the remains of General Pulaski in December 1853, had them examined by the coroner and requested they be buried in the monument. The monument was complete on December 20, 1854 and dedicated on January 8, 1855.

Lottery Tickets for the Pulaski Monument circa 1846

The final act of the Commissioners of the Pulaski Monument was consummated yesterday, in the delivery of that chaste and elegant structure, the object of their labors and pride, in all its beauty and perfectness, into the custody of its future guardians, the Mayor and Aldermen of Savannah. The presentation was made at the base of the monument, by Dr. R. D. Arnold, Chairman of the Board of Commissioners, in the presence of the Judges of the Supreme Court, a detachment of Military under Capt. W. H. C. Mills, a number of other distinguished persons, and a large concourse of citizens. The address of Dr. Arnold was an impromptu effort, that duty having been previously assigned to Col. Wm. P. Bowen, who was taken ill in the morning, and made it impossible to leave his bed at the appointed hour. But like other impromptu efforts of that popular orator, was most happily conveyed and elegantly expressed.

After a short and appropriate reply by the Hon. Edward C. Anderson, Mayor of the city, accepting the trust and pledging himself and his associates to protect and preserve it, the Commissioners with their invited guests, adjourned to the Pulaski House, where a sumptuous collation had been prepared. Here a few hours were spent discussing the comentibles provided, and in short, happy addresses and appropriate sentiments, delivered by Dr. Arnold, the Chairman: Mr. Robertson, the Treasurer: the Hon. John N. Ward, Judge Howard, Father O'Neil, Messrs Alexander, Bryan and others of Savannah, and by Col. Hull of Athens, Hon. Andrew J. Miller of Augusta, and other distinguished guests.

A novel and most happy idea was the collation prepared in the square at 4 o'clock in the afternoon for the pupils of the various Schools of the city. Nearly five hundred covers were laid, and a perfect mountain of Sweetmeats, Cakes, Fruit and all things most likely to tempt the appetites of the juvention. These (ample as was the provision,) were soon annihilated and the "Boys of Savannah" gathered around the stand to listen to the words to be addressed to them by Dr. Arnold. at this time Col. Bowen stood at the side of the oration, but was too ill to address his little friends.

It was a beautiful sight to see the neatly dressed scholars, with their white satin badges of silk banners of various designs, marching with their several teachers at their head, around the square into the places assigned them by the order of the ceremonies. This was altogether a most happy idea and the partie was one which will be long and fondly remembered in mature years by the little participants in the happiness, which the commissioners must have felt, as they imparted it to all who approached them on this memorable occasion.