The above 1929 photograph, which accompanied the article on the left, is in very poor condition. Only under the most favorable lighting conditions one can faintly make out: 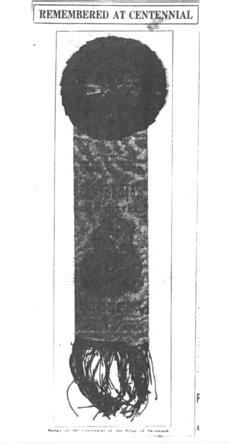 On October 9, 1879, Savannah celebrated the 100th anniversary of the Siege of Savannah in 1779. In a multi-page article (that took up approx. one-third of the entire newspaper) printed in the Savannah newspaper on October 8, 1879, it documented the Siege of Savannah and prominently featured Gen. Pułaski's participation. (The article is too lengthy to reproduce here.) However the schedule of events for the celebration, contrary to the October 8th newspaper article, focused attention on Seargent Jasper and the laying of the cornerstone of his monument. An anomaly to this is apparent contradiction is found in a Savannah Press newspaper article of 1929 (in conjunction with the 150th anniversary), when a Savanniahian displayed the official centennial badge from the 1879 celebration, having Gen. Pułaski's likeness as the central image.

The ceremony's order of procession was as follows:

The Procession Route was described as follows:

The column will move promptly at ten o'clock down South Broad to Abercorn street, down Abercorn to Broughton, up Broughton to Drayton, down Drayton up Bay, up Bay  to Whitaker, up Whitaker to St. Julian, down St. Julian to Bull, up Bull to Liberty, down Liberty to Abercorn, up Abercorn to Harris, up to Bull, up the west side of Bull to Charlton, down Charlton to Drayton streets.

The Program of Exercises was described as follows:

After the exercises, the troops proceed to proceeded up Drayton St. to Forsyth Park to be reviewed by,  the governors, who were escorted from Madison Square by the cavalry, and in their honor, the proper, artillery salute was fired. The German Fusiliers of Charleston, S. Carolina, the only surviving organization that participated in the engagement in which Jasper fell,

was selected as a special escort for the Orator of the Day.

(Note: The Savannah Newspaper edition of October 10, 1879 is missing, therefore only information preceding the ceremony is available.)

(Reproduced below is the newspaper article from October 11, 1929 article about the centennial badge.)

Of Siege of Savannah

Pulaski's Likeness Was Upon Its Face

In going over some of the effects of his father, the late Emil Wambold, yesterday morning, William Wambold of the Odeon Theater, found a badge used in the centennial celebration in Savannah on October 9, 1879, another evidence of the regard in which the memory of Brigadier General Casimir Pulaski has been held in this city and the determination to do honor to him at all suitable times.

At the centennial Sergeant William Jasper's memory was particularly observed because the laying of the cornerstone of the monument in Madison took place then. The monument was not completed until a few years later. The parade held on the day of the anniversary was one of the largest and most spectacular ever held here, artillery, infantry and cavalry from many sections of the South, and including regular United States troops, paraded. There were several brigades in line. Charleston sent a number of companies, as did Augusta, and other points. The Morning News issued a Jasper centennial edition, in which cuts of Pulaski, Benjamin Lincoln, McIntosh and others were used. Prominent in the parade were Gen. Lafayette McLaws, Gen. A. R. Lawton, Maj. Basinger, Maj. Anderson and other soldiers whose memories are yet fresh in the minds of Savannahians.